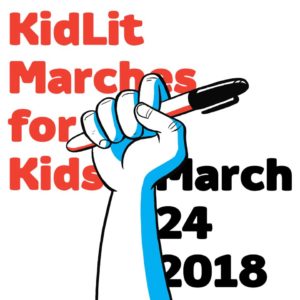 This is an email I’m sending out to local authors, illustrators, and others in the children’s book community in Western Massachusetts. Reach out to me if you’d like to get involved!

As you may have heard, authors Jenny Han and Raina Telgemeier launched a social media effort #KidLitMarchesforKids to organize the children’s book community in support of the March for Our Lives actions happening nationwide on Saturday, March 24. I am writing to see if you’d like to get involved with this effort at the Northampton, MA march, and perhaps with an associated local group, the Youngest Marchers for Our Lives. They are working to involve young children in a meaningful way that will include a gathering at the UU Society during the post-march rally at City Hall. In their words, “It is our hope to march together on March 24th with the main March for Our Lives and then offer an activity that is appropriate for preschoolers and early elementary age children during the rally.”

I plan to meet up with the Youngest Marchers group at 1130AM at the side steps of Northampton High School. They plan to march at the back of the group, and my family and I will join them. I will bring some signs with the #KidLitMarchesforKids graphics that Raina Telgemeier and Nick Caruso designed, and I hope that many authors, illustrators, and others in our field will join me. Bring your own signs, too, and let’s tell kids of all ages that we’re here to support them.

The march will end at City Hall, and then there will be a rally led by high school students that will include a die-in. The Youngest Marchers group is planning to separate from this main rally to attend a gathering at the UU that will include music and movement led by Sarah Pirtle in the basement social room, followed by storytimes led by me, a local kindergarten teacher, and anyone else who’d like to share books about peaceful conflict resolution, kindness, and youth activism. I’ve compiled a picture book list to hand out to families, and I will also bring books for families to read at the UU. Please let me know if you’d like to volunteer to read a book or help out in some other way. Of course, if you’d rather attend the rally after joining the #KidLitMarchesforKids group during the march, that’s fine! Or if you’re marching with another contingent but would like to end up at the Youngest Marchers event at the UU, that’s fine, too.

When I tweeted Jenny Han to say I’d be happy to help coordinate #KidLitMarchesforKids group in Western MA and asked if anyone else was already organizing here, she retweeted me and said “Now someone is!” So, I guess I volunteered myself! But I have a confession: I am a terrible FaceBooker! I have a public author page, where my pinned post is about the #KidLitMarchesforKids effort, but I am not very adept at using FaceBook to connect with others. I will try to respond quickly there, or via email, and I’m also using the hashtag on twitter, which is the social media platform I use most. So, if someone else is more active on FaceBook than I am, please feel free to boost all of this information there—or let me know if others are already doing so and I will try to connect with them.

Thanks for taking the time to read this, and I hope to see you on March 24. Feel free to reach out with any questions.

P.S. Here is a post I wrote for the Kid Lit for Kids’ Lives site created by author Ann Braden. It has many open letters from people in the children’s book community to the Parkland students and others organizing for gun law reform. She is still posting letters there if you’d like to contribute in that way, too.