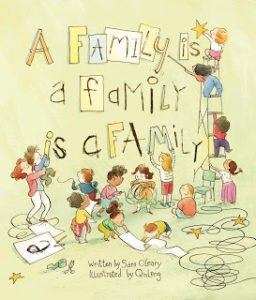 One of my favorite picture books from 2016, A Family Is a Family, Is a Family (Groundwood) by Sara O’Leary and illustrated by Qin Leng, does a beautiful job of making the introduction of diverse family constellations the heart of its story. The premise is simple: A foster child who feels worried about talking about family at school overcomes this concern after hearing twelve classmates describe multiracial families, families with two dads or two moms, a family headed by a grandmother, and more. From this picture book could emerge thirteen stories about the thirteen children and their families (calling O’Leary and Leng?) but it stands well on its own as a purposive book with ample appeal in its moving text and warm, humorous illustrations.

Resistance to this book and others like it can emerge not only from homophobia or other biased and oppressive worldviews, but through capitulation to what Black, feminist, lesbian, poet and writer Audre Lorde calls “the mythical norm” in her 1984 book Age, Race, Class, and Sex: Women Redefining Difference. It is hard to push back against the mythical norm, which casts as other those who aren’t “white, thin, male, young, heterosexual, Christian, and financially secure” (to which I’d add cisgender, neurotypical, and able-bodied) because the nature of the mythical norm is to present itself as common sense and truth, and not as cultural myth bent on reinforcing social power structures. But if we want to effect change, if we accept the call that We Need Diverse Books, we must push back. While committed to such work, those of us who fall outside the mythical norm in our personal identities or family structures may reflexively apologize for our queerness, our non-normativity, as the result of our own internalization of the myth.

This is what I saw myself doing when I met with my eldest son’s middle school principal at about a decade ago. As we discussed an issue my son was having with a bully at his school, I gave his principal some context for our multiracial, queer, adoptive, blended family. “It’s kind of complicated,” I sheepishly said to him.

“Wait,” he said, stopping me. “It sounds like you’re apologizing. There’s no such thing as a typical or right-kind-of family in this school. No one ever has to apologize for their family here.”

Anyone who knows me well might be shocked that I didn’t burst into tears—I tend to wear my heart on my sleeve, and my tears readily flow in times of anger, sadness, compassion, joy, gratitude, or as Ali Benjamin describes them in her middle grade novel The Thing about Jellyfish (which includes secondary characters who are gay), when I am overwhelmed with “love tears.” But in that moment at my son’s middle school, my eyes were dry because I was taken aback by the principal’s generosity, his righteousness, and his determination as a straight, White man in a position of authority, to make me know that my son and I, and our whole family, were safe in his school, and that I needn’t apologize for who we were.

That unapologetic attitude is one I try to take now when I write books for young readers and include matter-of-fact depictions of queer characters. In my first picture book, A Crow of His Own (Charlesbridge 2015) illustrated by David Hyde Costello, the main focus of the story is on a group of anthropomorphic farm animals, but there are two human characters, too: Farmer Jay and Farmer Kevin. When I wrote the text I knew I wanted them to be a gay couple, and I suggested that David could use illustrations to convey their relationship and this part of their identity however he saw fit. I imagined a rainbow flag on the barn, or a sticker on the back of their pickup truck, perhaps. Instead, David depicts their relationship through their interactions with each other: in one picture they are cast in silhouette, cuddled up on the couch watching tv, and in two other scenes Farmer Kevin’s arm is around Farmer Jay’s shoulder.

The setting of the story looks like the rural areas of my town, with rolling hills in the background and a barn affixed with solar panels. Its plot revolves around Clyde the rooster, a newcomer to Sunrise Farm who struggles to fit in with the barnyard community and must learn to crow a crow of his own—or, in other words, to be himself. If I put on my 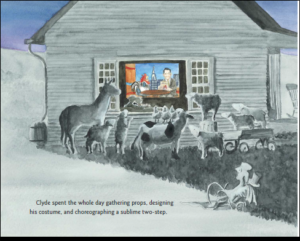 Lorde-reading gender-studies lens, I think of Clyde as a character who navigates a different performance of masculinity than does his predecessor, Larry, and the gay farmers’ presence reinforces this theme. He’s “a scrawny little guy” in contrast with Larry, whom David depicts as a big, swaggering rooster like the Loony Tunes’ Foghorn Leghorn, who’s gone off to pursue “new opportunities.” (David interprets this in the art as show business, with Larry being interviewed by Stephen Colbert on the television that Farmer Kevin and Farmer Jay watch).

A couple of months ago I saw a review of my book on Amazon that got me thinking about the work of writers and readers alike in resisting the mythical norm. It describes the inclusion of Farmer Kevin and Farmer Jay as “revolting” and “sneaky.” While the first adjective plainly reveals the reader’s homophobia, the second relies on acceptance of the straight mythical norm as truth since the inclusion of gay farmers can only be deemed sneaky if their presence is somehow unexpected. But here’s the truth that destabilizes that position: our world is a diverse one. It would be an unusual day, indeed, that I’d find myself in a place where everyone was White and straight, for example, and so that’s not the kind of world I write about. Novelist Mary Robinette Kowal writes, “It’s not about adding diversity for the sake of diversity, it’s about subtracting homogeneity for the sake of realism.” I write from what I know, and that is a world populated by diverse people. Even gay farmers. 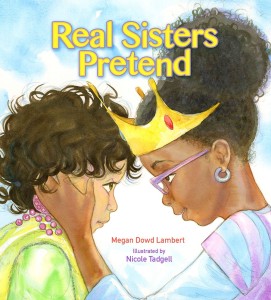 Another reader’s review on Goodreads called my second picture book, Real Sisters Pretend (Tilbury House 2016) illustrated by Nicole Tadgell a “[b]eautifully told story of adopted sisters, racially diverse, told in the language of little girls.” She then went on to say “[p]roponents of traditional marriage may be turned off by the unnecessary inclusion of lesbian parents at the end.” I believe this reader meant that while racial difference between the sisters is integral to the story, the inclusion of lesbian parents (who are first depicted in a family photo on the dedication page) is “unnecessary” because the story is not focused on the fact that the girls have lesbian parents. It’s true that I could have written the same story with a heterosexual, married mother and father adopting the girls, and then “proponents of traditional marriage” wouldn’t be “turned off.” But I’m not much invested in making sure that homophobic readers aren’t “turned off,” or “revolted,” for that matter. Nor do I accept the mythical norm of heterosexuality as default. I also could have depicted the girls being adopted by two dads, or by a single parent, after all.

Furthermore, queer people have higher rates of adoption than straight people do. A 2013 study found that “Same-sex parents in the United States are four times more likely than different-sex parents to be raising an adopted child. Among couples with children under the age of 18 in the home, 13% of same-sex parents have an adopted child, compared to just 3% of different-sex parents.”[i] In this sense, I regard the lesbian parents in Real Sisters Pretend as absolutely necessary. They represent a key demographic in the landscape of American adoption, and one that is largely absent from contemporary picture books 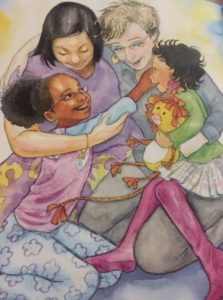 It’s true that Momma and Mommy are not on every page of this picture book. Nor are Farmer Jay and Farmer Kevin on each page of A Crow of His Own. But that’s not because I’m trying to be “sneaky.” As the title Real Sisters Pretend and Nicole’s gorgeous cover art suggests, my story is about the girls and their sisterhood. So many adoption picture books I’ve read focus on filial love between adoptive parents and adoptees, and they often seem to be fixated on affirming the adoptive parent at the risk of ignoring the complexity of adoption and its inherent losses. I wanted to write a book that would shift attention away from parents and toward children and sibling bonds. And in my other book, because I reject straightness as the default, I wanted the farmers to be a gay couple. David modeled them after friends of his, not farmers but an artist and an intellectual property attorney, and they were tickled pink.

My current writing projects are varied. I’m working on a beginning reader series about two girls who are best friends, which will debut in 2019. I’ve also contracted with Charlesbridge to publish a sequel to A Crow of His Own. Titled A Kid of Their Own, it will also publish in 2019 and is about Clyde’s adjustment to having a kid and his mother nanny goat move to Sunrise Farm—sort of a riff on the well-trod new baby theme, with gay farmers present as secondary characters, once again, and this time they adopt a child at book’s end.

And mixed in with this writing, I’m also reading. It’s true that good writing depends on reading, and I’m thrilled to see ever more children’s books including depictions of multiracial families, queer parents, foster families, adoptive families, and families whose stories (like mine) are at the“intersections” of those identities, to borrow a term from critical race scholar, Kimberlé Crenshaw. (Just take a look at how the Rainbow Book Lists have grown over the past decade!) While other writers and I have had our books derisively called “political” or agenda-driven for including diverse characters,  I’d argue that their exclusion is political, too. It’s up to writers, artists, publishers, and readers alike to recognize this truth and work toward a more inclusive children’s literature.